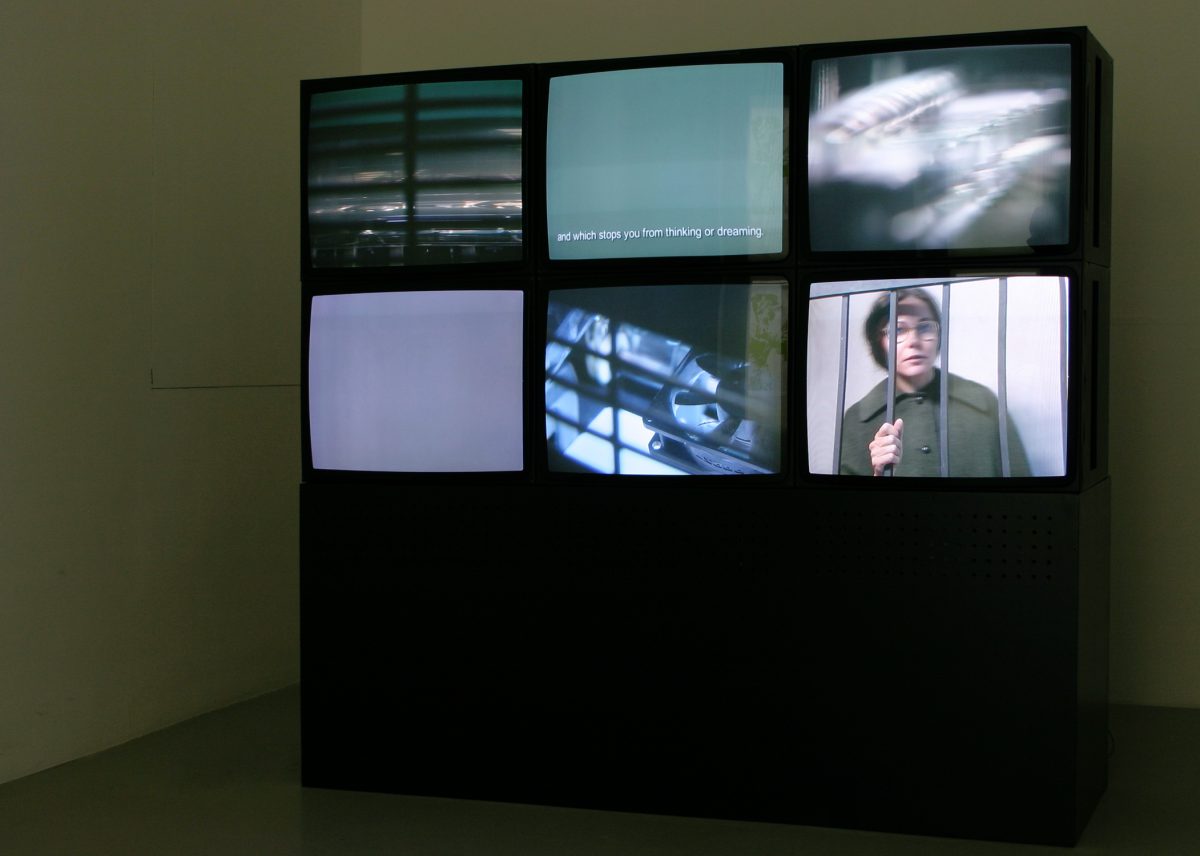 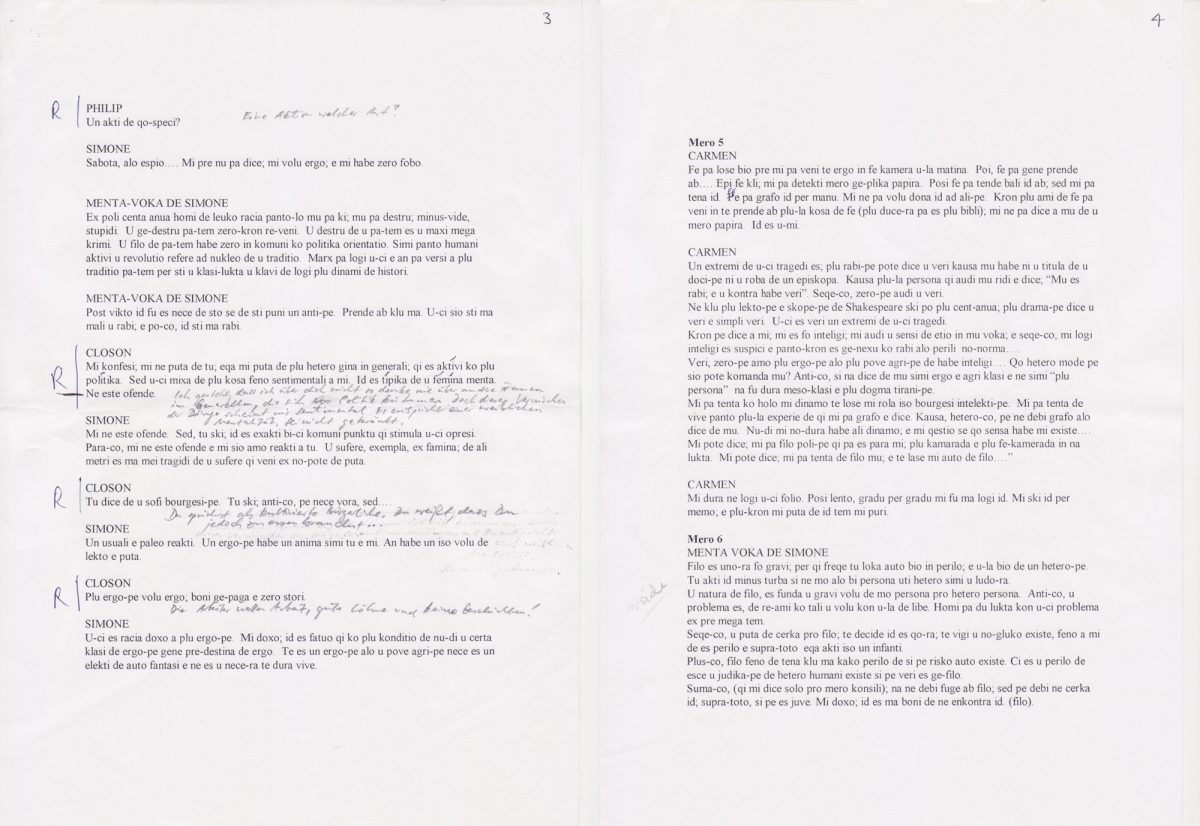 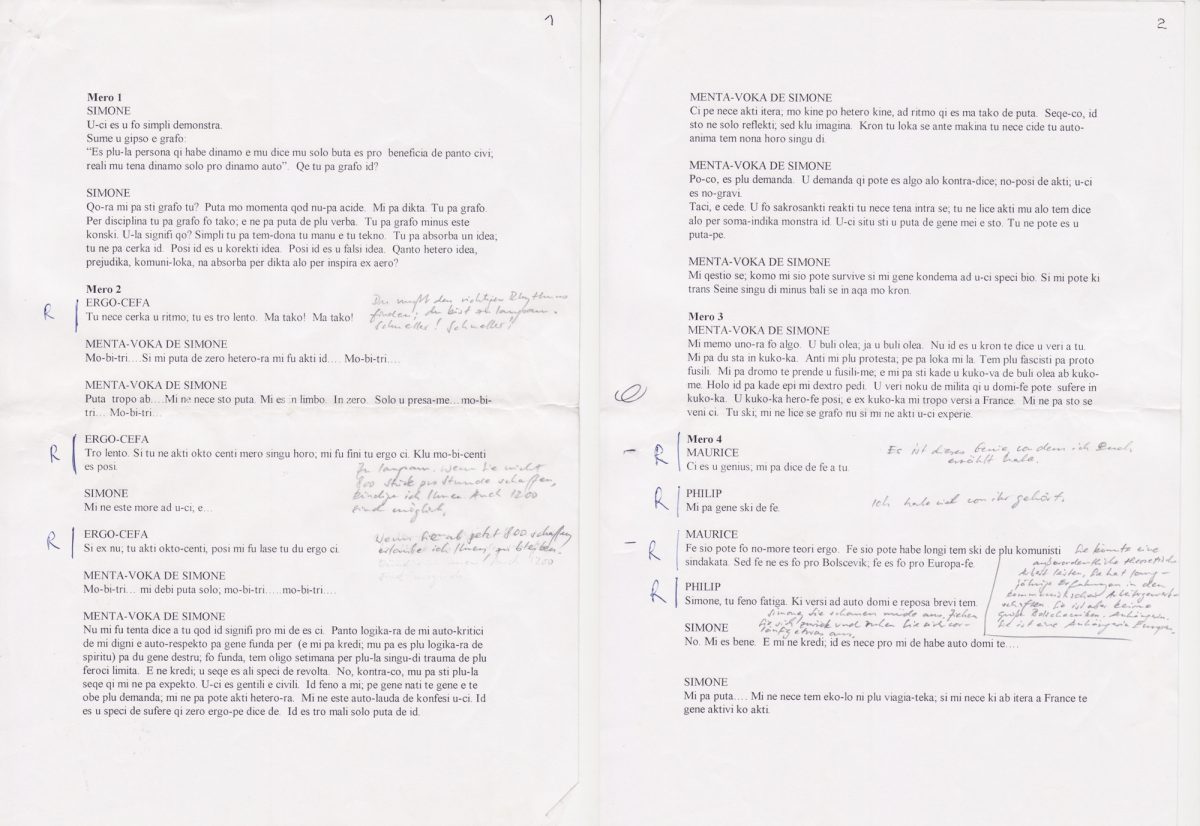 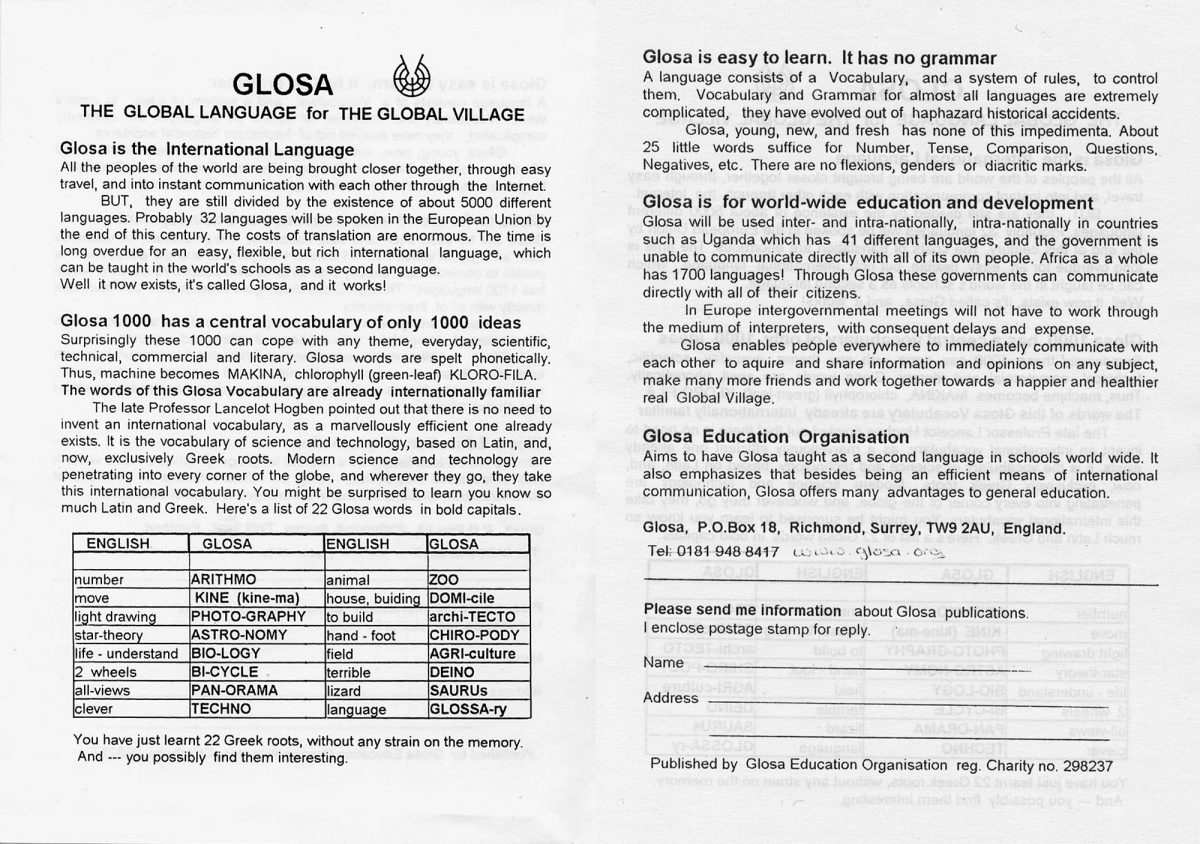 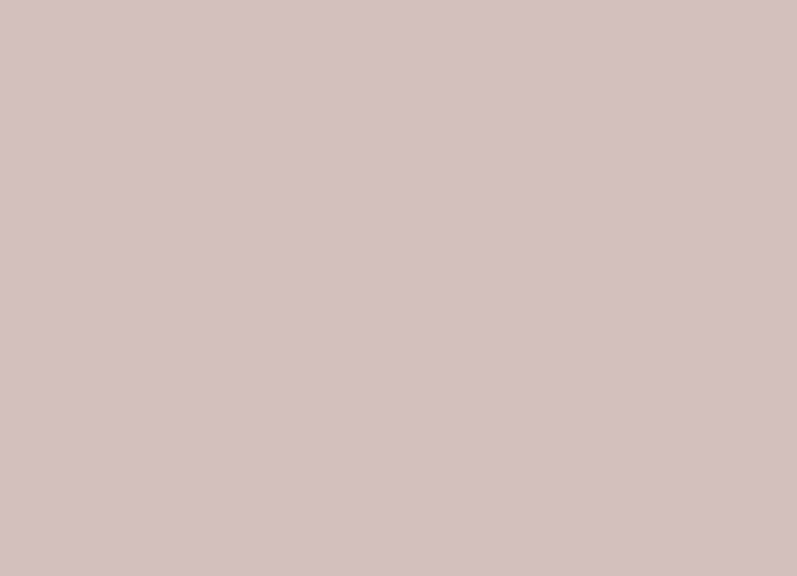 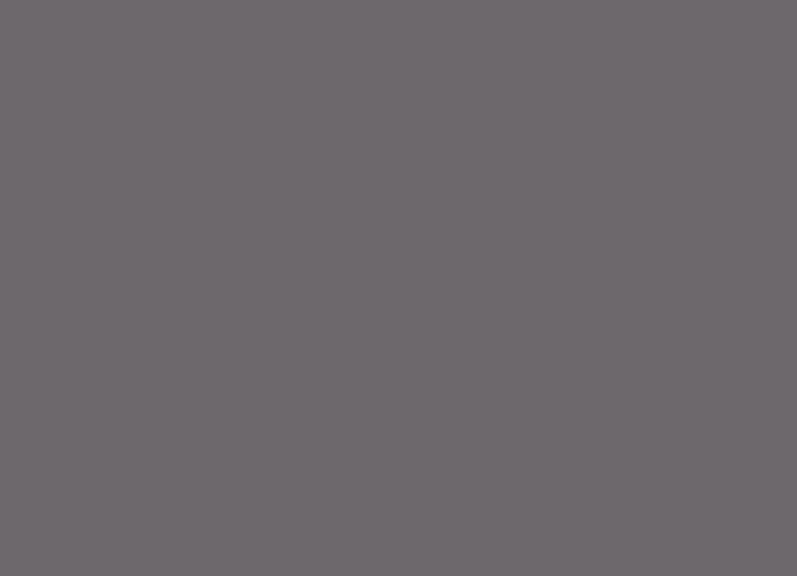 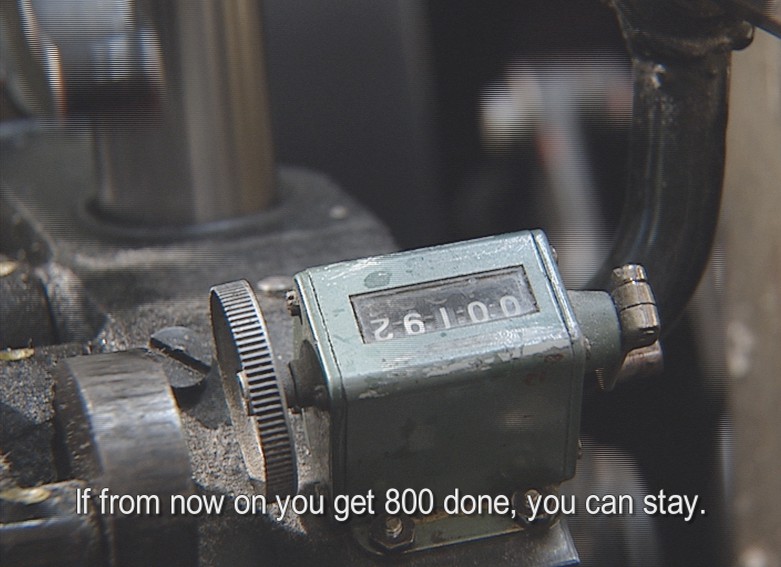 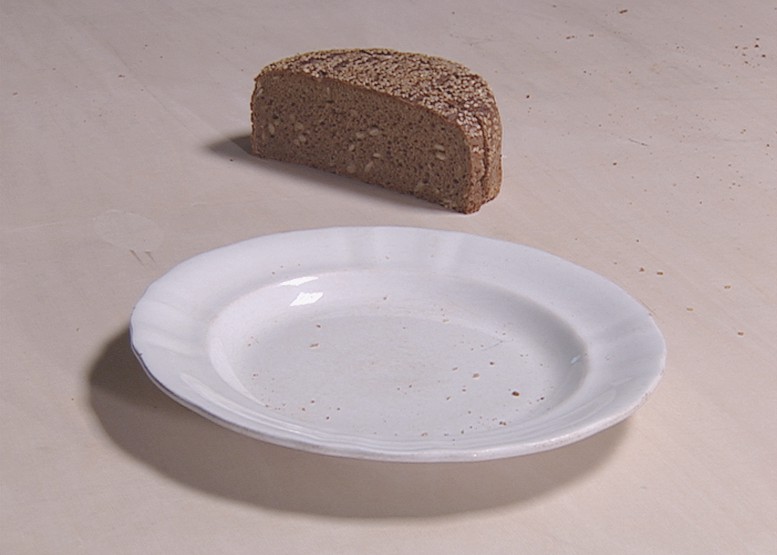 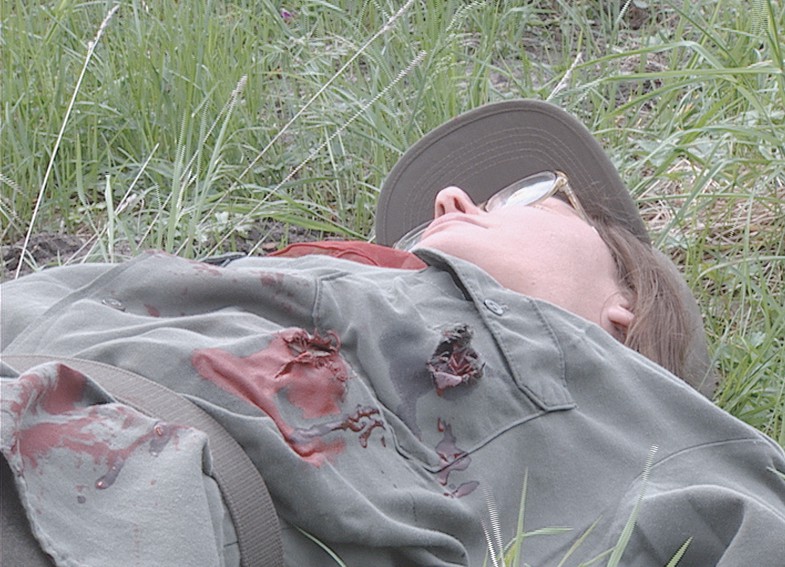 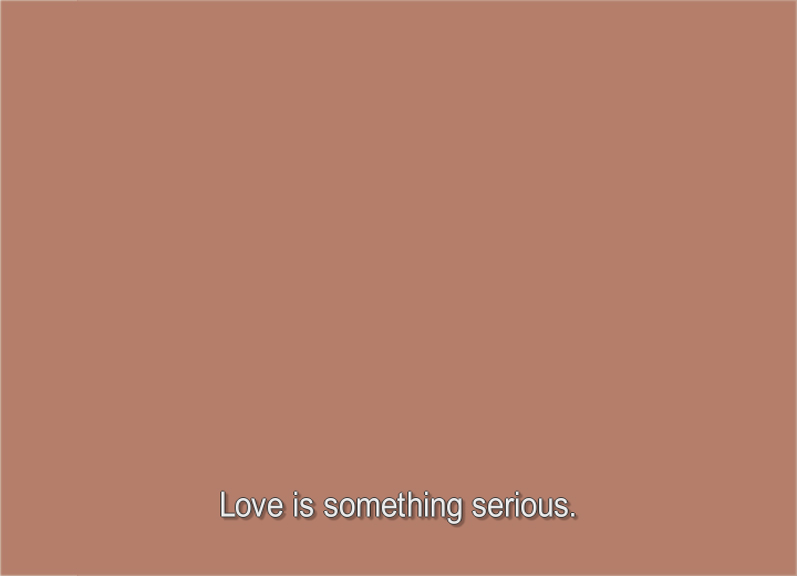 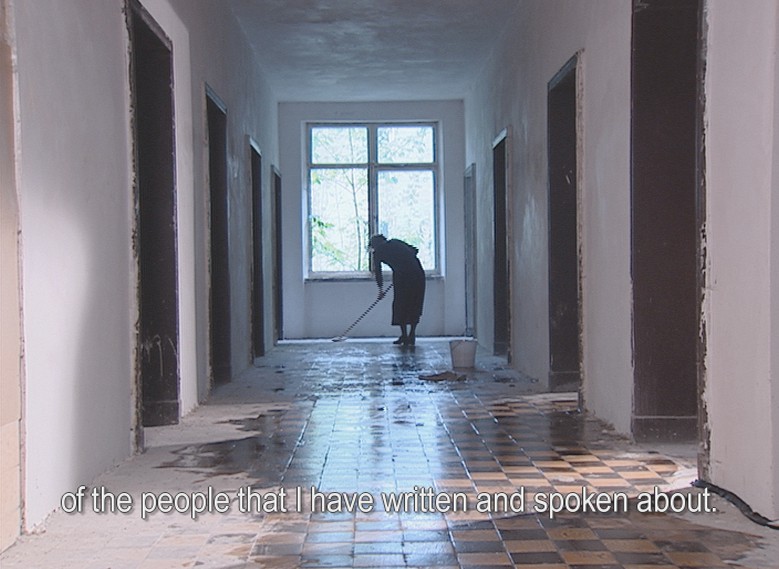 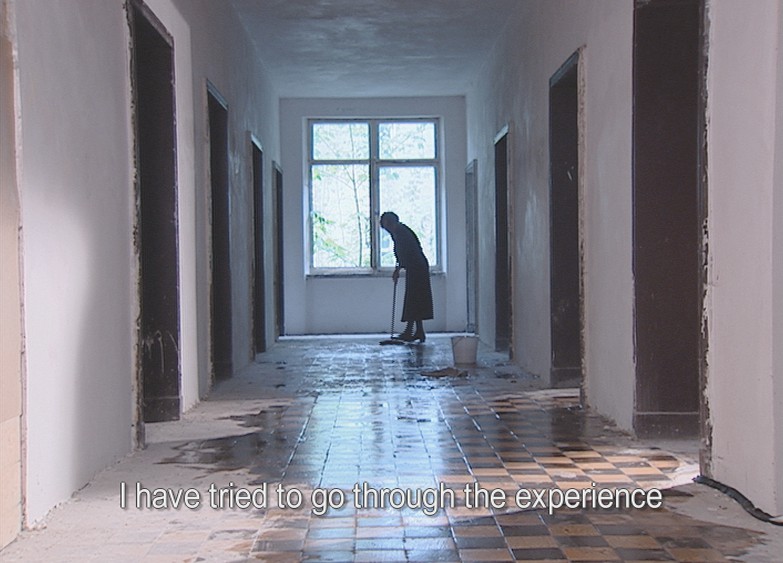 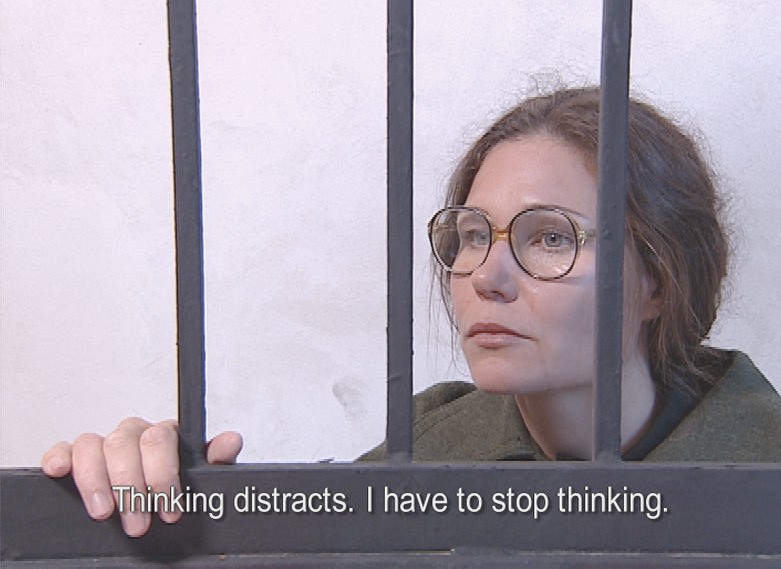 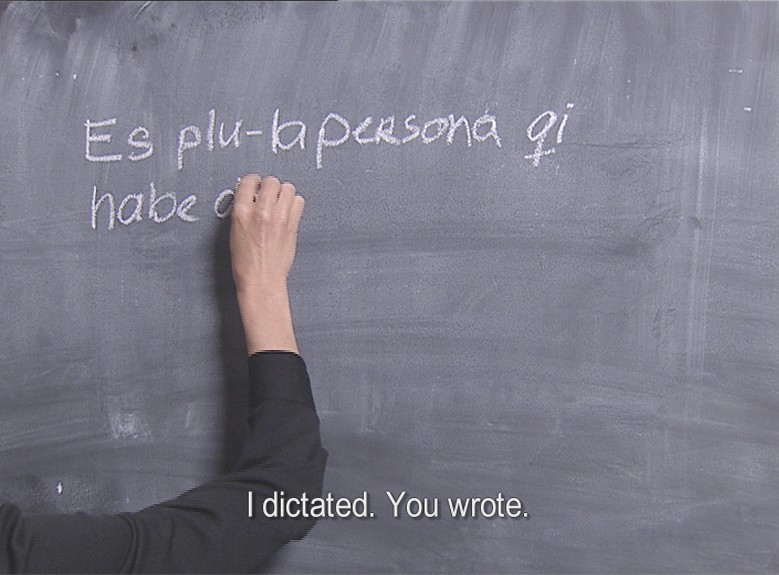 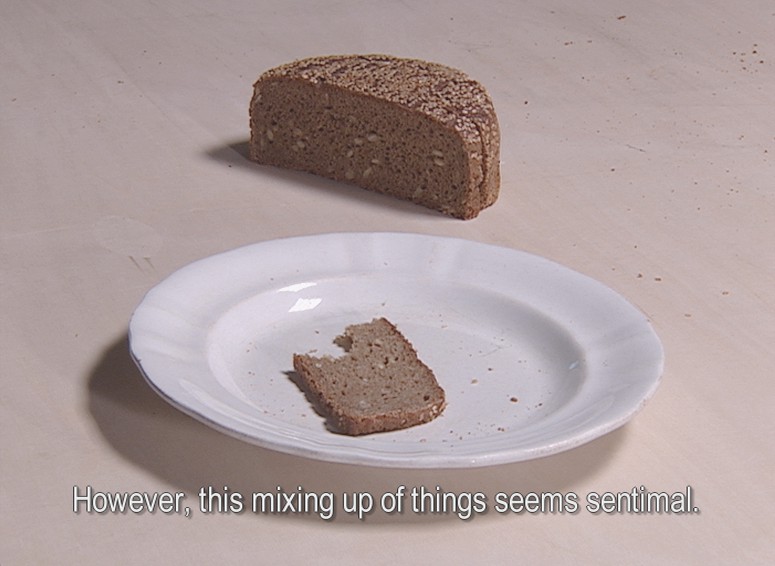 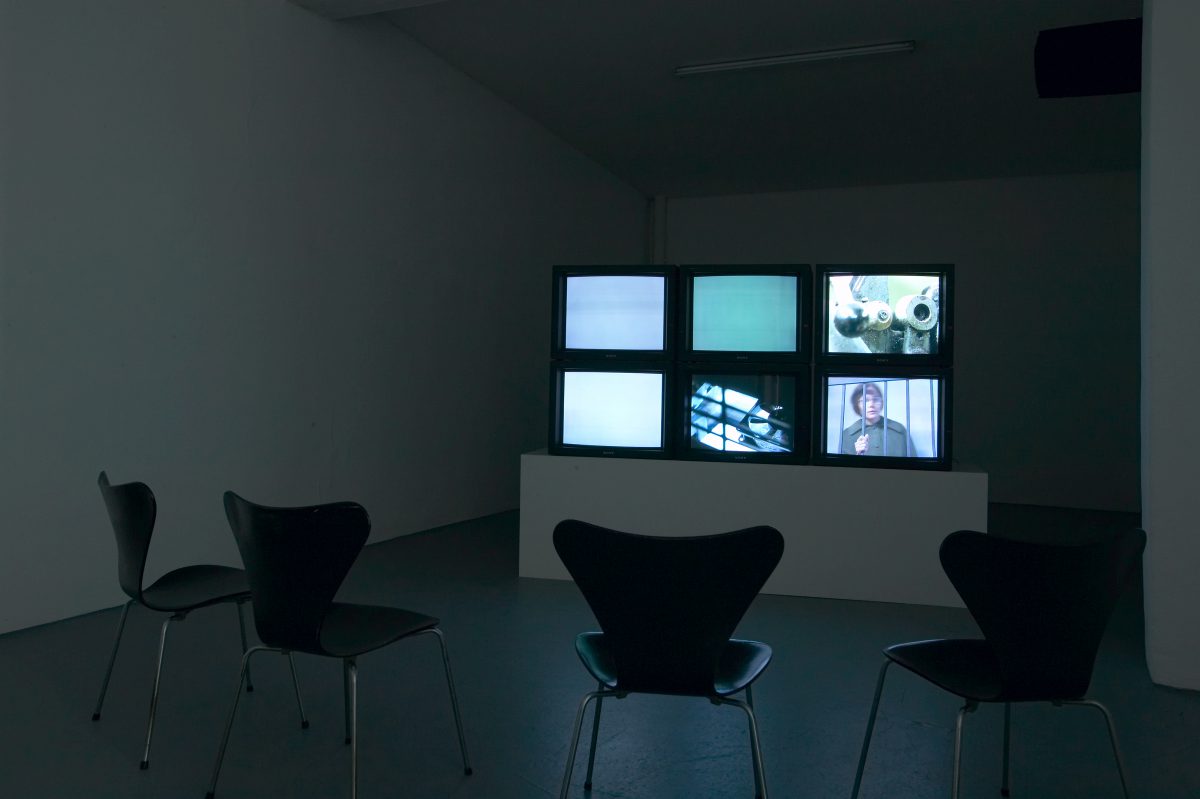 The text of Qo akti? is taken from the script of an unrealized film by Italian film director Liliana Cavani, Lettere dall’ interno (written in 1974), about the life (her struggle to free the working class and provide equal opportunity for everyone) and thoughts (about death, suffering, and sacrifice) of the French philosopher Simone Weil. The script is translated into Glosa, an universal artificial language developed in 1943 by Professor Hogben. Glosa is an international language that has a vocabulary of only 1000 words and is based on scientific terms. It can be learned in three days and therefore is easily accessible to everyone. The video is shot in the former Nazi barracks in Krampnitz in the vicinity of Berlin where the Russian army was stationed before German reunification.

Factory Boss: You have to get the right rhythm.
You are too slow. Faster! Faster!
Inner Voice Simone: One, two, three…
If I don’t think of anything else, I might make it….
Thinking distracts. I have to stop thinking.
I am in limbo. I am in nothing.
Just the press machine: one, two, three… one, two, three…
Factory Boss: Too slow. If you don’t make 800 pieces per hour, you will be sacked.
It’s possible even to do 1200.
Simone: I am not used to…
Factory Boss: If from now on you get 800 done, you can stay.
Inner Voice Simone: One, two, three… I mustn’t think of anything else:
One, two, three…one, two, three…
One, two, three… one, two, three…
I’ll try to explain to you
what it means to me to be here:
All principles on which my dignity
and self-esteem used to be based on
were destroyed only after a few weeks –
destroyed through the brutal and daily delimitation.
And don’t think that I revolted against it then.
It’s the opposite: something has happened
that I never thought of – I became obedient.
I seem to be born to receive and obey orders –
as if I never did anything else or could do nothing else.
I am not proud of that.
No workers talk about this suffering.
It’s bad enough just to think about it.
You have to do one movement after another
to a rhythm that is faster than thought
and which stops you from thinking or dreaming.
If you work on the machine
your soul has to be switched off for nine hours per day.
Then there are demands. Sometimes they hurt,
are contradictive or simply can’t be fulfilled.
But whatever they are –
you have to keep quiet and obey.
You have to keep your reactions to yourself…
Just shut up and do nothing.
Your thoughts waste away and are being replaced.
In short: You are not allowed to be a thinking person.
If I was condemned to such a life,
would I be able to cross the Seine
without being tempted to throw myself into it?

Carmen: She was already dead when I came to make her room
in the morning. Then they took her away…
On her bed, I found a crumpled piece of paper.
Maybe she wanted to throw it away. I kept it.
It was written by hand. I didn’t want to give it to anybody.
When her friends came to collect her belongings
– mainly books – I didn’t mention the note.
It’s mine:
“The really tragic thing is
that crazy people can tell the truth
because neither are they teachers
nor wear they episcopal robes.
People laugh and say, “They are crazy anyway,
you can only believe the opposite.”
Therefore nobody really sees the truth.
Not even Shakespeare’s audience
has comprehended after four centuries
that the actors tell nothing but the truth.
That is the real tragedy.
When they tell me I am intelligent,
I feel a sense of shame in their voice.
Intelligence is something suspicious.
It it always linked to insanity or dangerous eccentricity.
In fact, nobody wants
intelligent workers or peasants…
How else could they be suppressed?
As long as we see them as a class of workers and peasants
but not as “people,”
we will stay bourgeois and dogmatic tyrants.
I have tried as hard as I can
to get rid of my role as a bourgeois intellectual.
I have tried to go through the experiences of the people
that I have written and spoken about.
Only this way I have been able to talk and write about them.
Now that I have no strength left,
I ask myself about the sense of my existence…
I can say that I have loved
many people by my side:
male and female comrades in our struggle…
I can say that I tried to love them
and to let myself being loved…”
I still don’t understand all of this text.
Perhaps, in time I’ll understand it better.
I know it by heart and sometimes
I think about it while cleaning.