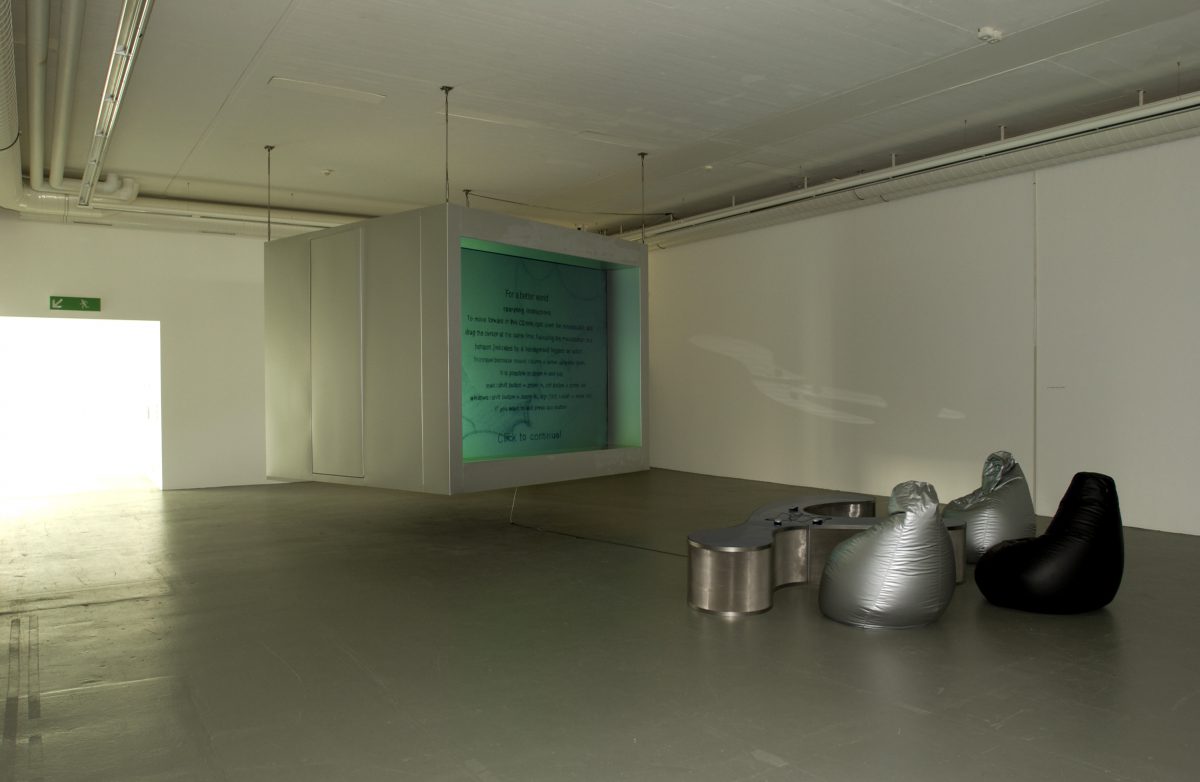 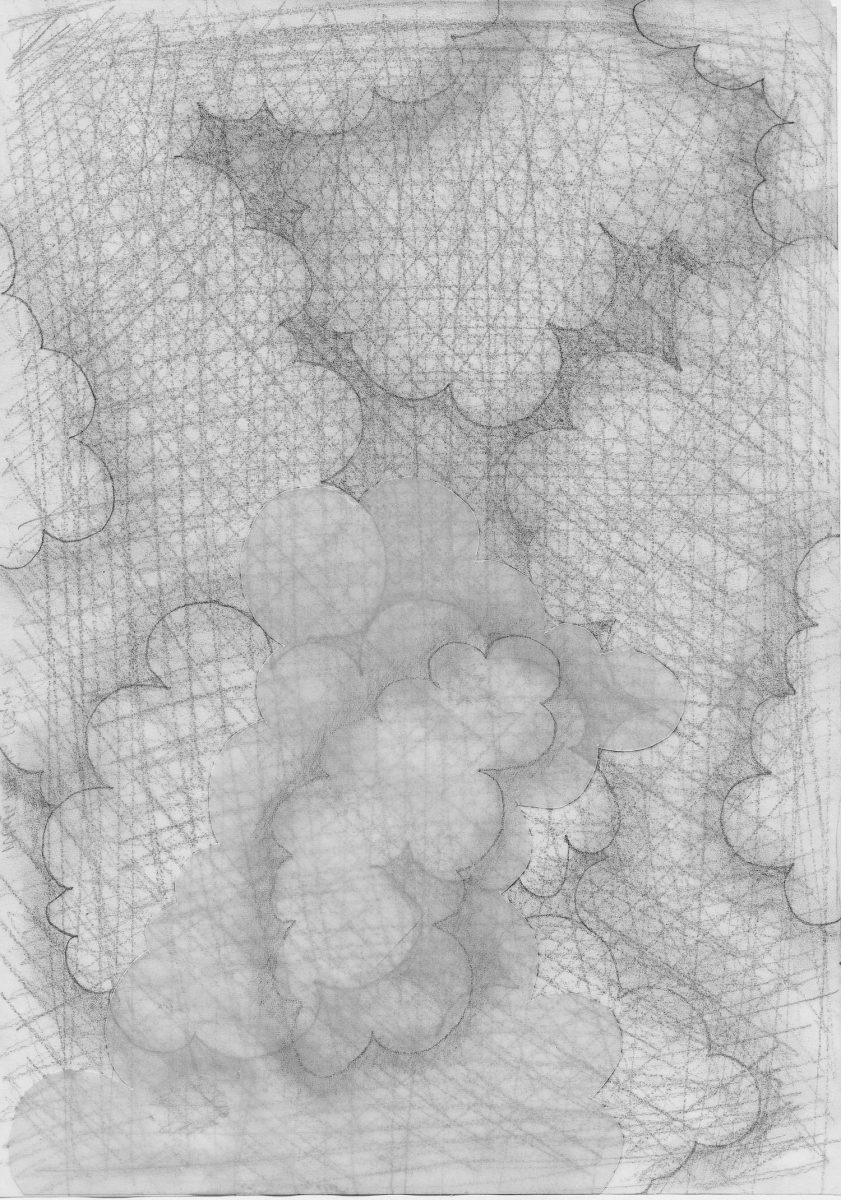 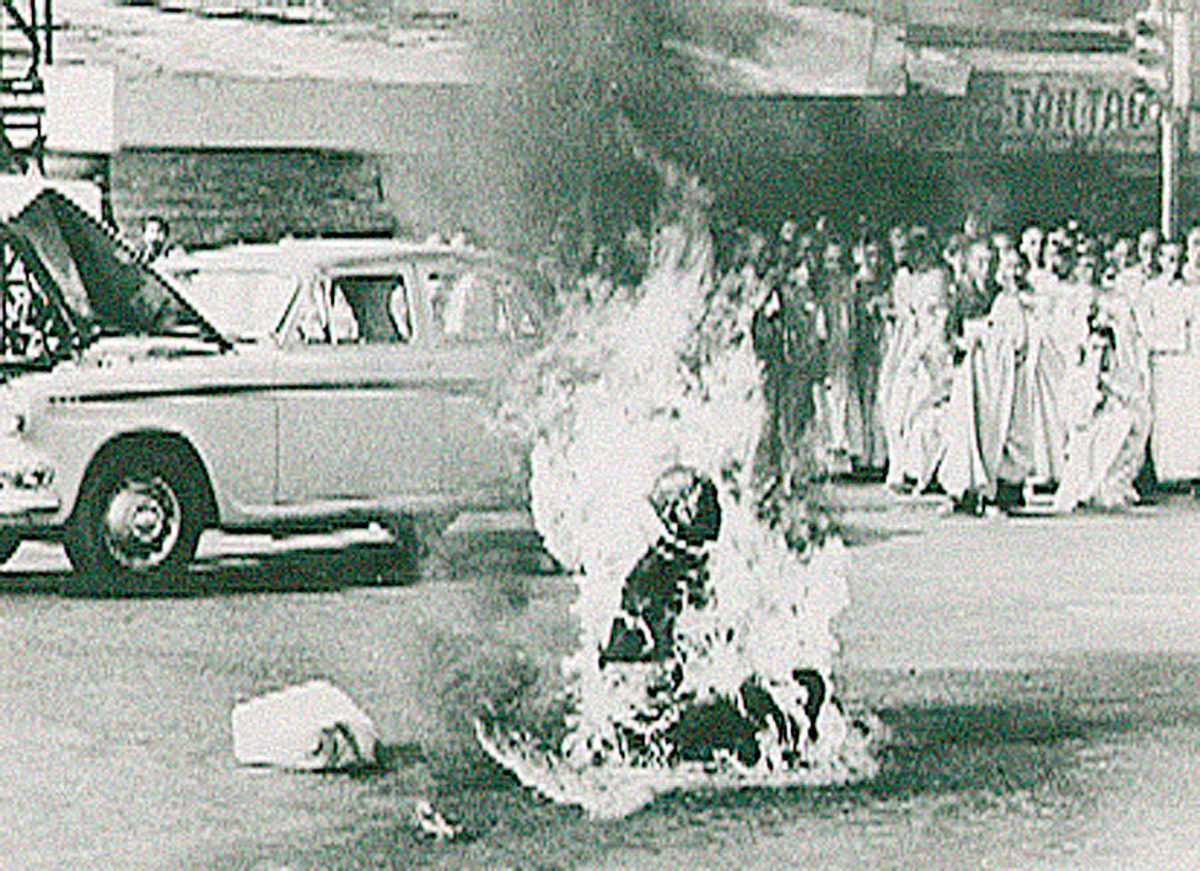 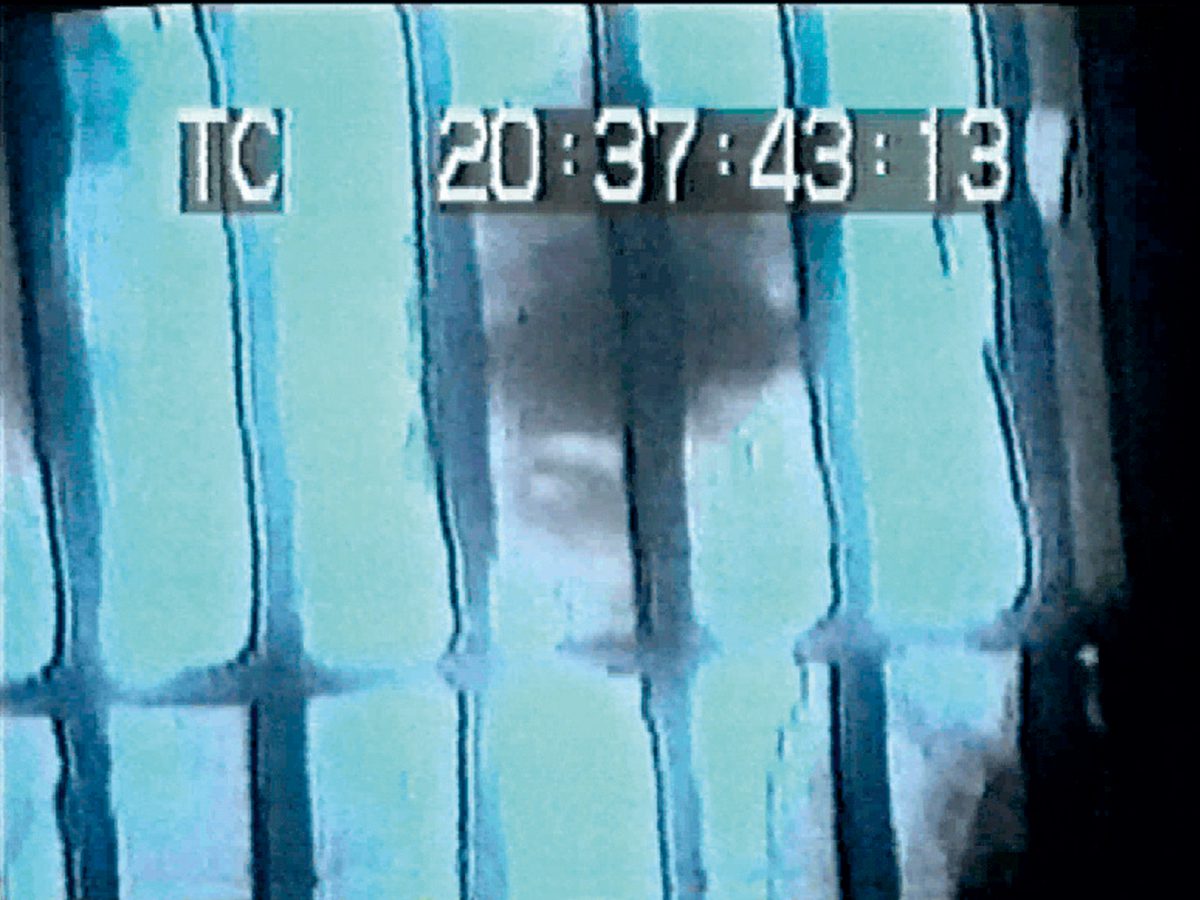 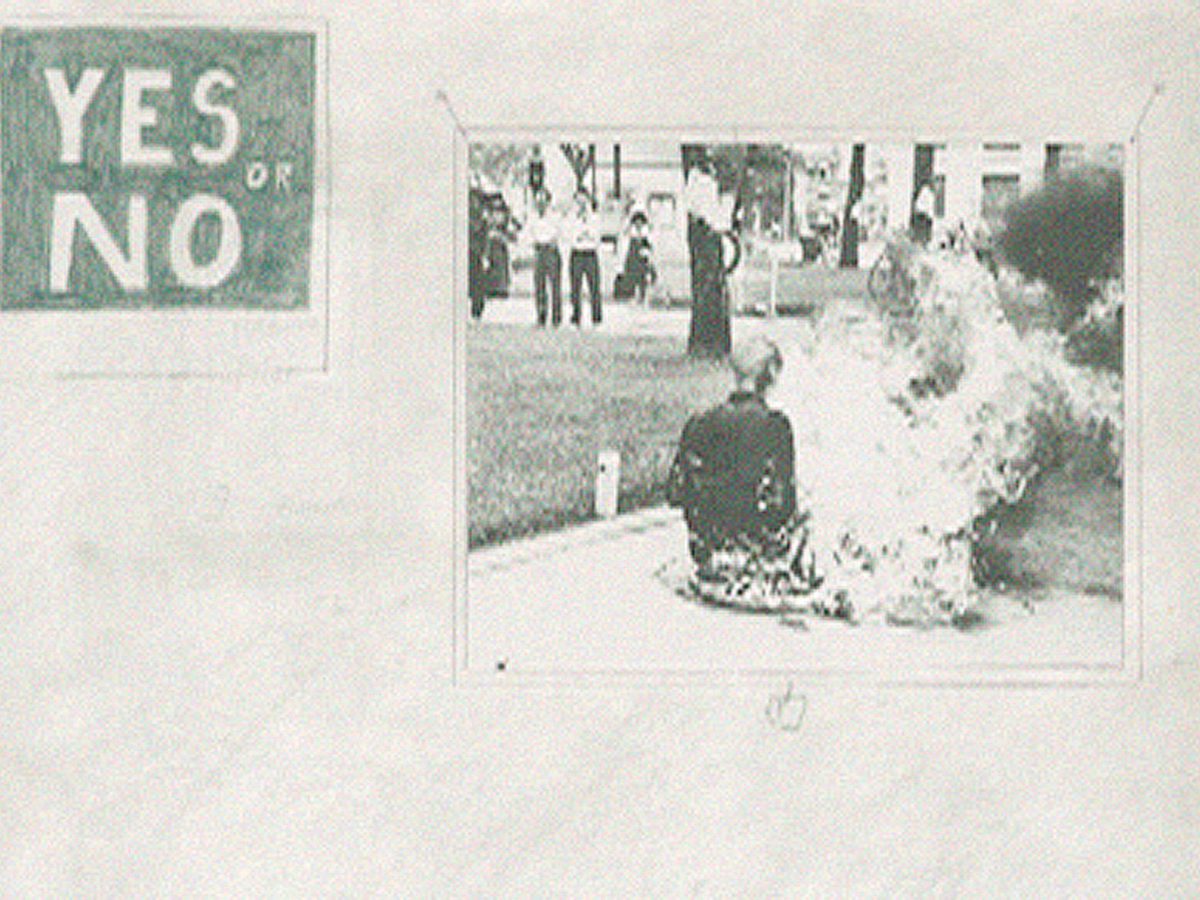 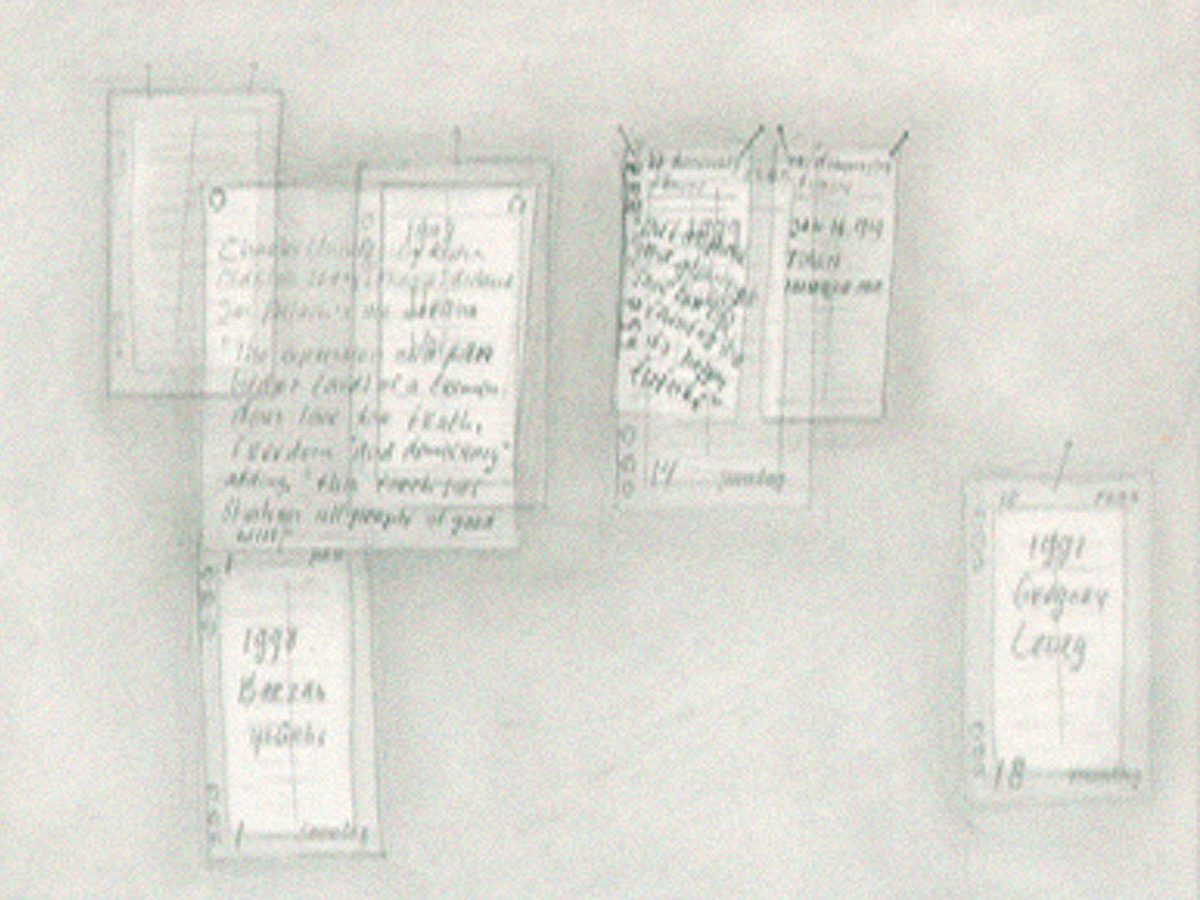 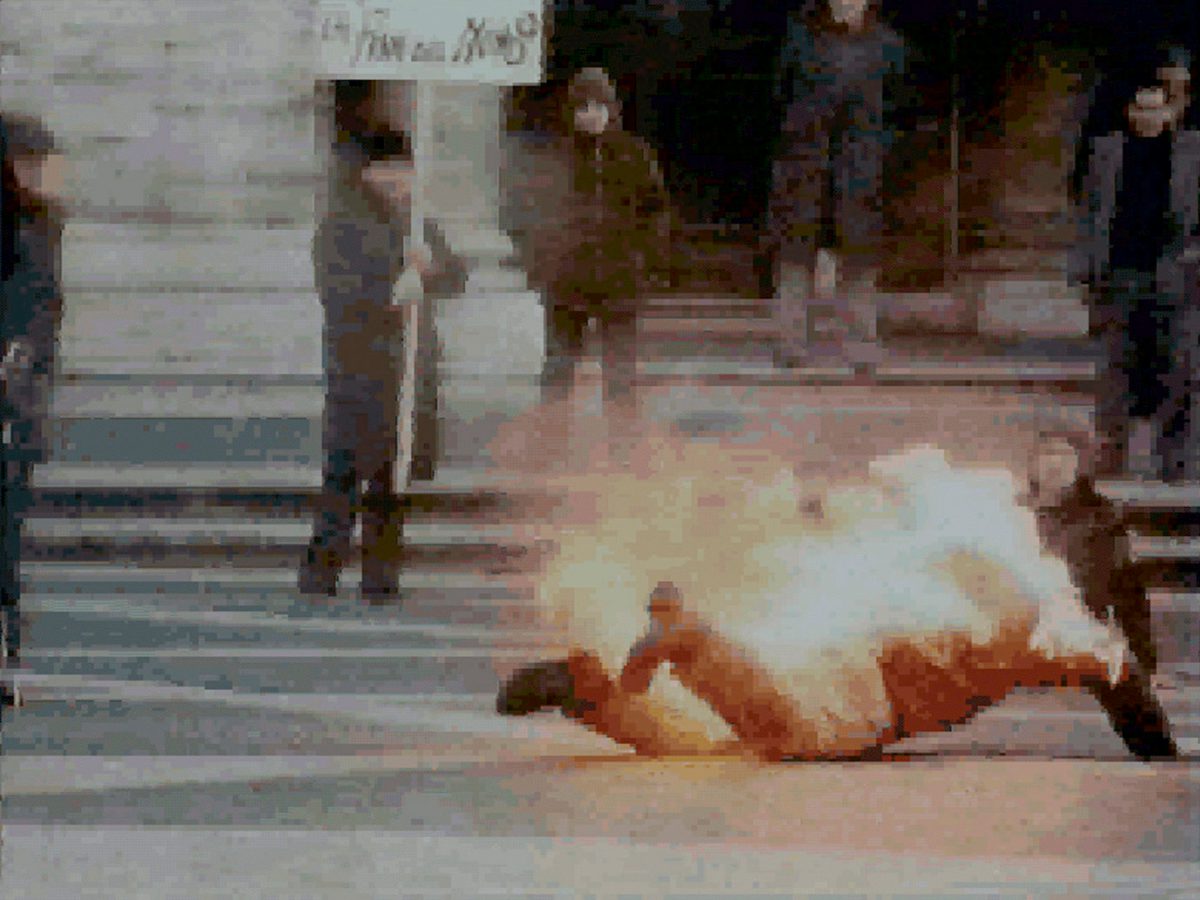 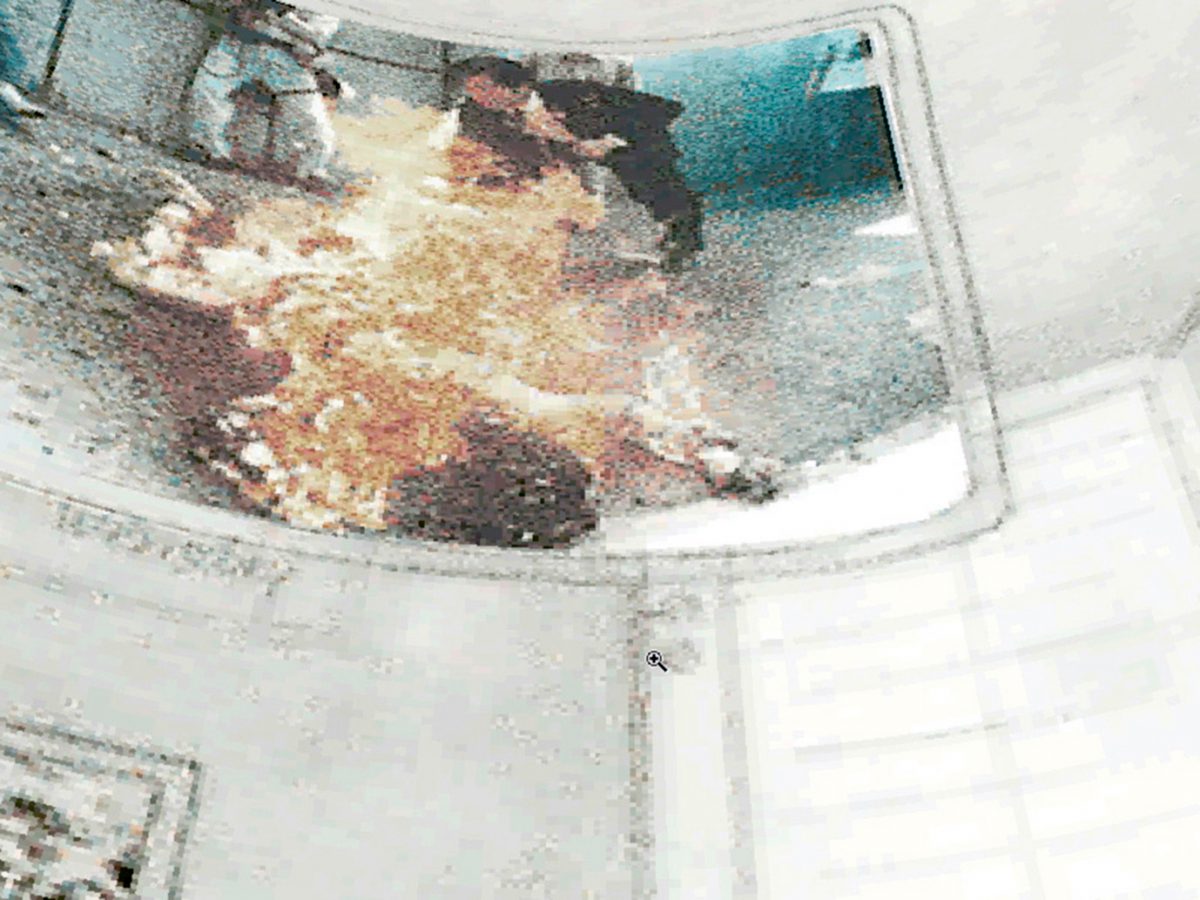 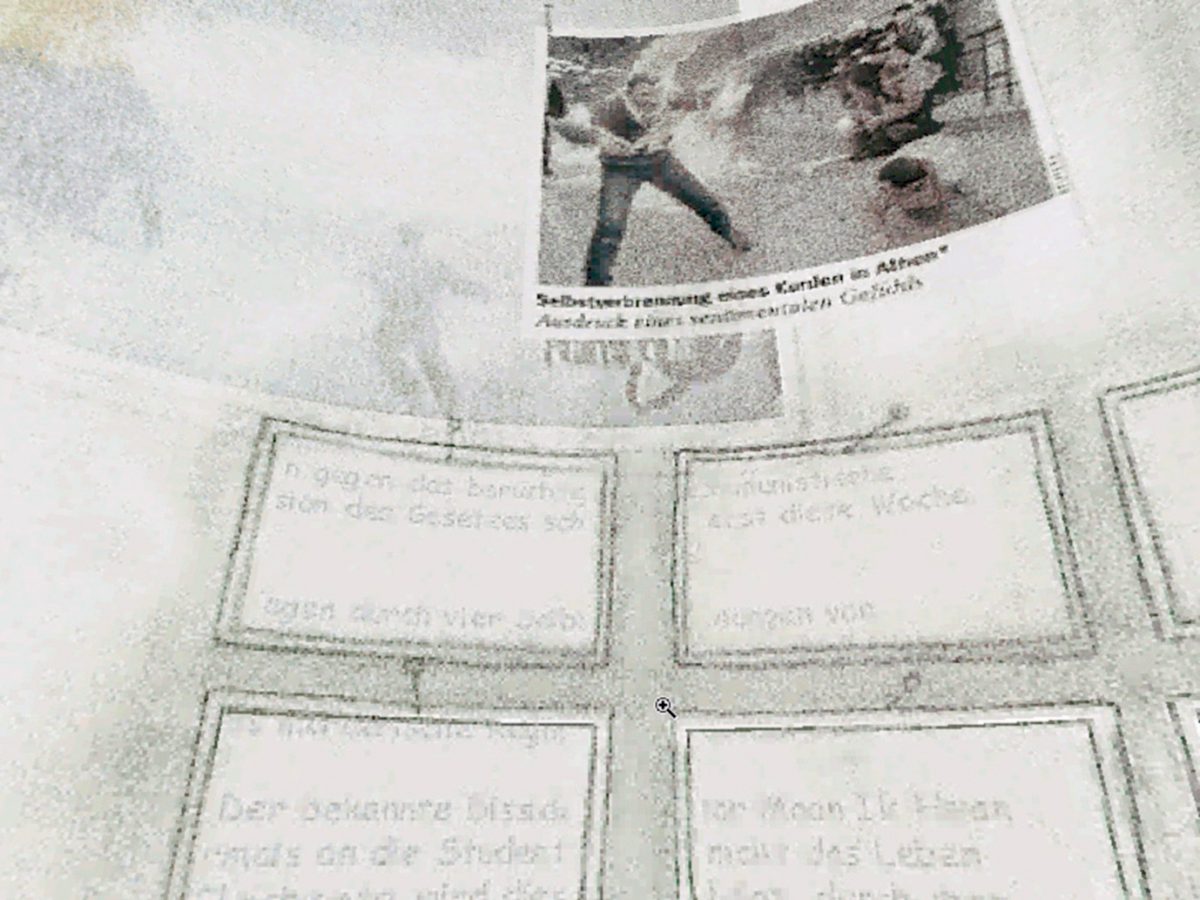 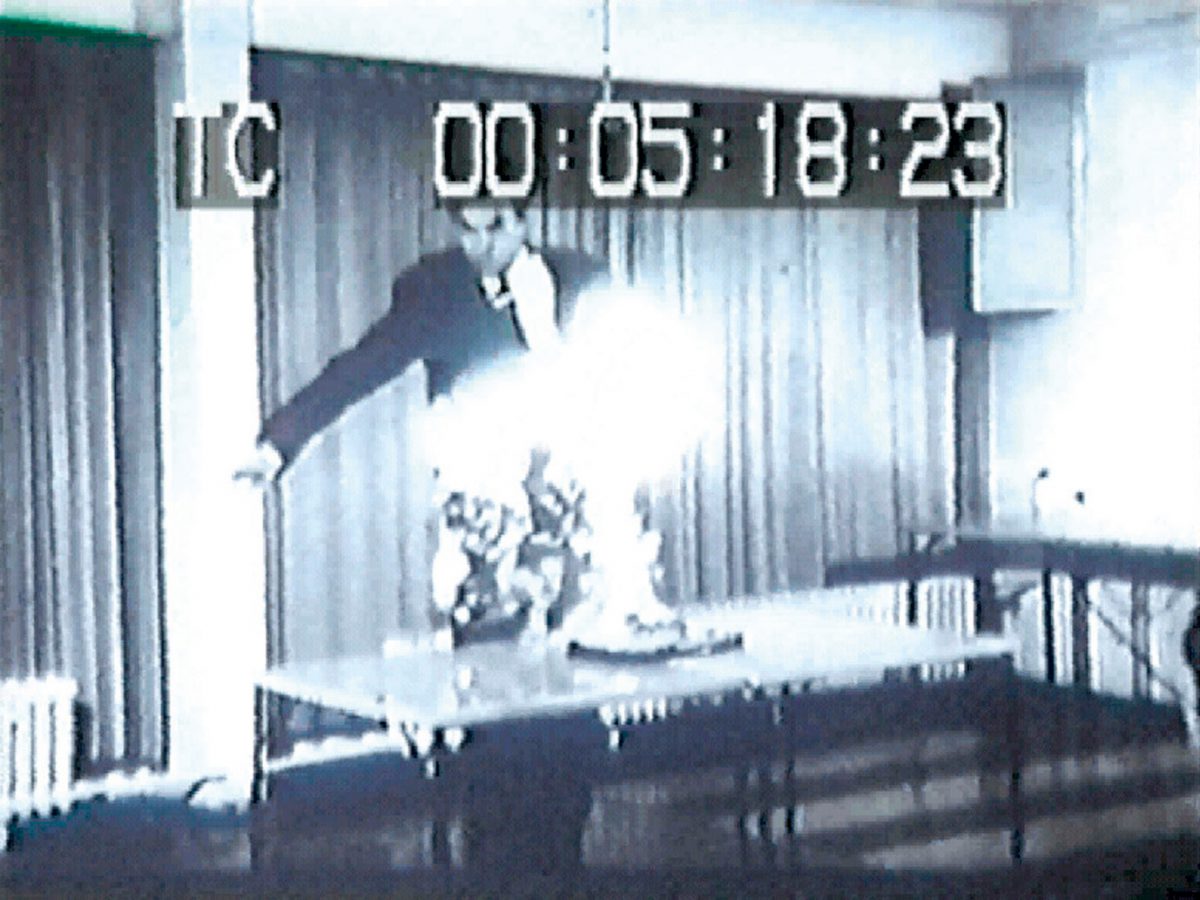 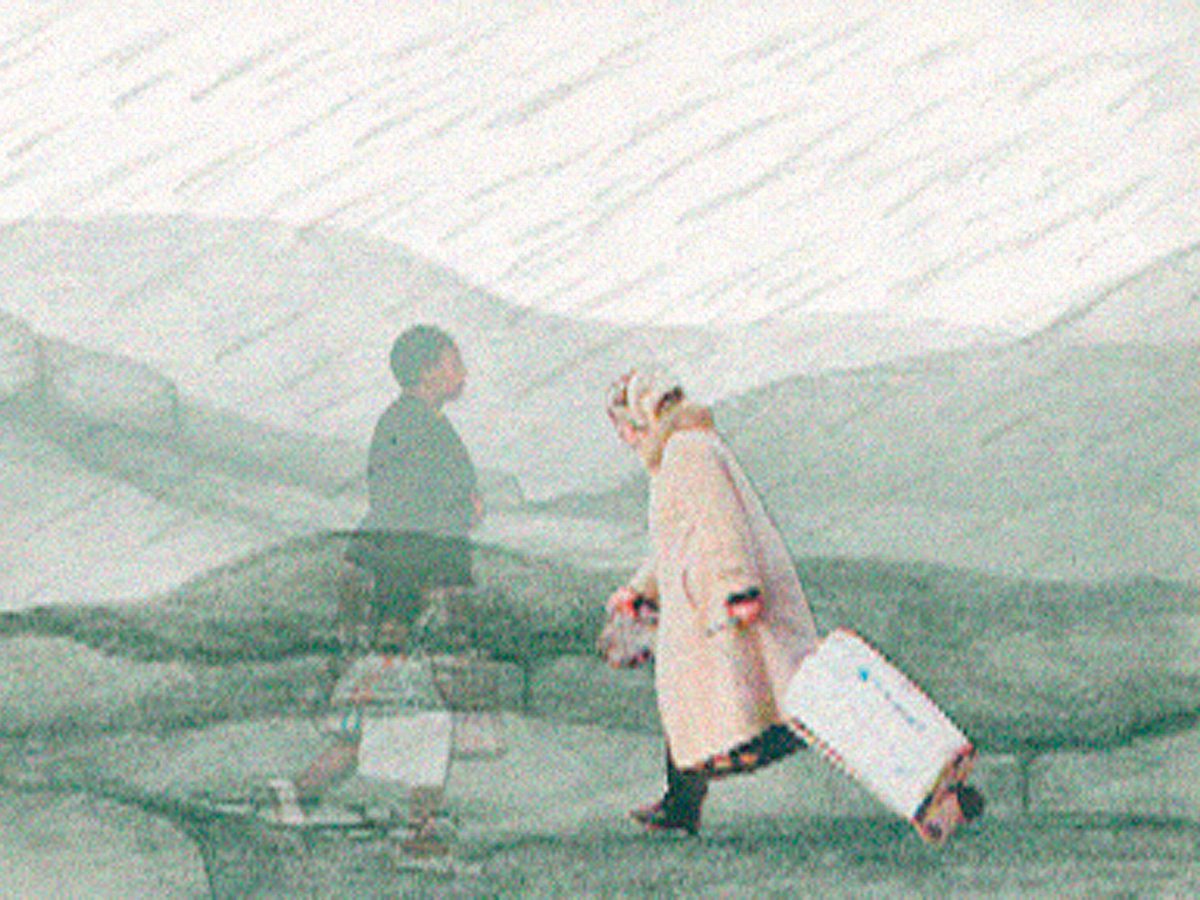 This CD-ROM deals with the phenomenon of self-immolation by burning as a political act. The delegating of the role of the victim and the exploration of the issue of self-immolation as a moral and ideological act, demonstrate the artist’s quest for revealing the complexity of power relationships that condition our political and emotional reality. The presentation consists of several different, drawn, surfaces, through which one can navigate. By clicking on certain hot spots of the CD-ROM, viewers can also access video fragments of suicides by burning collected from news agencies.

Suicide by burning and other forms of self-injurious behaviors which involve burning are sometimes considered to have religious overtones. The ritual death of widows upon their husband’s funeral pyre is closely associated with Hindu beliefs. Buddhist have used self-immolation as a form of protest. The Judaeo-Christian traditions have imagery of fire as cleansing and purifying; there is also secular imagery associating fire with images of condemnation and evil. Previous studies have described religiosity as a common theme among survivors. The present study describes the ways in which persons who inflicted selfinjurious behaviors through burning, including attempted suicide, imagine the divinity and use religious language to give meaning to their experience.
In order to differentiate among motives for this behaviour, there are three classifications of persons who select fire as their method of suicide. These are burning by ‘intelligent and calculating persons for idealistic purposes …’; ‘by individuals prone to acute emotional reactions … as an outlet for aggresive tensions …’, and by those with an ‘abnormal personality.’ This final category can be broken down into (a) persons with fire fetish; and (b) who are ‘mentally unstable.’ [1] Political protests fall into the first category, that is, for ‘idealistic purposes.’

Case Study 1
A 25-year-old male with two previous suicide attempts and previously diagnosed with depression was admitted with 19% total body surface area burns. The suicide attempt was in response to a separation from his wife and child. The patient indicated no religious affiliation. In conversation with a chaplain, he stated he has “no hope” and that “nothing can change”, and that his situation is “permanent.” Throughout his hospitalization he reported feelings of hopelessness and despair, stating, “I have lost it all … it doesn’t matter anymore.” He regretted burning himself, wishing he had attempted suicide in a less painful and more succesful manner. During this admission he attempted to strangle himself with a telephone cord and to leave the hospital against medical advice.

Case Study 2
A 26-year-old male parapelegic was admitted who reported a history of substance abuse and a longstanding difficulty coping with anger. The self-inflicted injury was in response to an argument with his brother. The patient indicated a religious affiliation of ‘Christian.’ He believed that God should be angry at his brother for taunting him. He felt justified, therefore, in his self-harming believing that hurting himself would make his brother feel guilty.

Case Study 3
A 37-year-old female with history of substance abuse, but who had abstained from drinking for six months, became intoxicated the day after her 37th birthday. She covered heself with a flammable liquid and set herself on fire after arguing with her family. She indicated no religious affiliation. Approximately 35 days post-burn, she stated she was no longer suicidal “because God had given me a purpose to help others.”

Case Study 4
A 33-year-old male with diagnoses of paranoid schizophrenia of 8 years duration and a history of suicidal ideation was admitted after setting himself on fire. The patient stated that he stopped taking psychiatric medications because he believed God had saved him. The deterioration in his mental status led to his suicide attempt. The patient indicated a religious affiliation of ‘Quaker’. He died in the Burn Center as a result of his injuries.

Case Study 5
A 34-year-old female was hospitalized three times for self-inflicted burns with cigarettes. She had psychiatric diagnoses of schizophrenia, seizure disorder, and depressive reaction. She stated, “I feel I deserve to be hurt” and repeated that she felt worthless, hopeless, distrustful of others. She reported sexual abuse as a child and a recent rape which precipitated the self-inflicted burns.

Case Study 6
A 44-year-old male with a psychiatric diagnoses of schizophrenia was admitted with 40% total body surface area burns. He doused himself with a flammable liquid and set himself and his home on fire in response to a belief that God would provide in death a release from the suffering of his mental illness. He stated, “I just want to be with God. I think it would be best.” He indicated no religious affiliation.

Case Study 7
A 34-year-old female with multiple personality disorder was admitted four times for self-injurious behaviors. The second admission was due to chemical burns totaling 10% total body surface. She explained that two of her negative personalities applied oven cleaner to her tight in the shape of the letters P and A. The letter P represented ‘punishment’ and the letter A (written upside down) represented the ‘horns of death.’ She stated this was a mark of the devil to prepare her for ‘the sacrifice.’ She stated her religious affiliation was Protestant.

Case Study 8
A 40-year-old male was hospitalised after he set himself on fire following an argument with his wife over alleged infidelity on her part. He had a history of depression, substance abuse, and obsessive disorder. He indicated that God had not been a reality in his life before this incident. When asked how he thought God felt about his attempted suicide he responded, “He didn’t want me, I didn’t think.” Further dialogue clarified his belief that God had a chance to take him and did not. He had been given a second chance at life and was making plans to seek counseling to help him with marital and personal problems.

“I can’t live simultaneously in my head and in my body. That’s why I can’t be just one person. I can feel myself countless things at once.
There are no great masters left, that’s the real evil of our time. Our heart’s path is covered in shadow. We must listen to the voices that seem useless. Into brains full of sewage pipes, of school walls tarmac and welfare papers….the buzzing of insects must enter. We must all fill our eyes and ears with things that are the beginning of a great dream. Someone must shout that we’ll build the pyramids.
It doesn’t matter if we don’t. We must fuel that wish. We must stretch the corners of the soul like an endless sheet. If you want the world to go forward we must hold hands. We must mix the so-called healthy with the so-called sick. You healthy ones! What does your health mean? The eyes of all mankind are looking at the pit… into which we are all plunging.
Freedom is useless if you don’t have the courage to look us in the eye, to eat, drink and sleep with us! It’s the so-called healthy who have brought the world to the verge of ruin.
Listen, man! If you, water, fire and then ashes. And the bones in the ashes. The bones and the ashes.
Where am I when I’m not in the real world and not in my imagination? Here’s my new pact with the world: It must be sunny at night and snowy in summer. Great things end, small things endure. Society must become united instead of being fragmented. Just look at nature and you’ll see that life is simple, that we must go back to where we were, to the point where you took the wrong turning. We must go back to the main foundations of life without dirtying the water.
What kind of world is this if a madman has to tell you to be ashamed of yourself.
The air is that light thing that moves around your head and becomes clearer when you laugh.”

News Footage Used in the CD-ROM

10 April 1965
A student sets himself on fire in Munich

21 December 2000
Canakkale Prison, Turkey
Female prisoner burning to death. Footage shot by Turkisch security forces. The four-day prison stand-of has left at least 26 people dead.
The prison siege, which began on a Tuesday in 20 jails, was aimed at ending a two-month hunger strike by leftist inmates who had said they would rather die than move from the wards to small cells, where they say they fear to be beaten or tortured.
The government has said that leftist, Kurdish and Islamist prisoners run their wards like indoctrination centres and are objecting to the move because it would reduce their power.

31 May 1966
Buddhist nun dies in fiery suicide in Vietnam

10 October 1998
Police and tow truck driver used their own clothes to save a distraught man who tried to burn himself to death, after arguing with his son. The incident began with a police pursuit from the town of Gatton, Australia. Police followed the man’s car at low speed, talking to him through the car windows. He would not obey their appeals to stop. When he finally set fire to himself, police from neighbouring Ipswich became involved along with ambulances and the fire brigade. A tow truck joined the police vehicles to restrict the car’s path. Suddenly the car stopped on the Bremmer River bridge and erupted in flames. Despite the threat to their own safety, policemen dragged the driver from the burning interior. They smothered the flames with their jackets. The man suffered severe burns to his upper body. His survival chances were unclear. (source: CHANNEL 7)

23 January 2001
Tianamen Square, Beijing
State television broadcast security camera footage of followers engulfed in flames and police rushing to put them out with fire extinguishers.
Hoping to lend validity to its crackdown on the Falun Gong spiritual movement, China portrayed five people who set themselves on fire on Tiananmen Square last week as obsessive sect members.
In its first comprehensive account of the attempted suicide, the government said seven Falun Gong followers had sought to commit suicide in hopes of “ascending to heaven.” Of the five who succeeded in setting fire on themselves, one 36-year-old woman was reported to have died. One man, his body and clothes charred and blackened, sat crossed-legged -a distincive Falun Gong meditation pose- after police had doused the flames. Police stopped two others from igniting themselves, among them a woman who drank gasoline from a Sprite bottle and repeadly yelled “let me go to heaven” after officers took away her lighter, Xinhua said.
Falun Gong has denied that the four women and one man who set themselves on fire were members of the group. It said the group’s founder, Li Hongzhi, clearly prohibits suicide in his teachings and described brief Chinese government accounts of the acts as an attempt to defame the group.
The attempted group suicide appeared to be the most radical act in what has largely been a campaign of civil disobedience against the communist government’s 18-month ban on the group.
It came three weeks after sect founder Li called for more vigorous action to protest the crackdown. The sect has been banned by the government and declared “evil.”