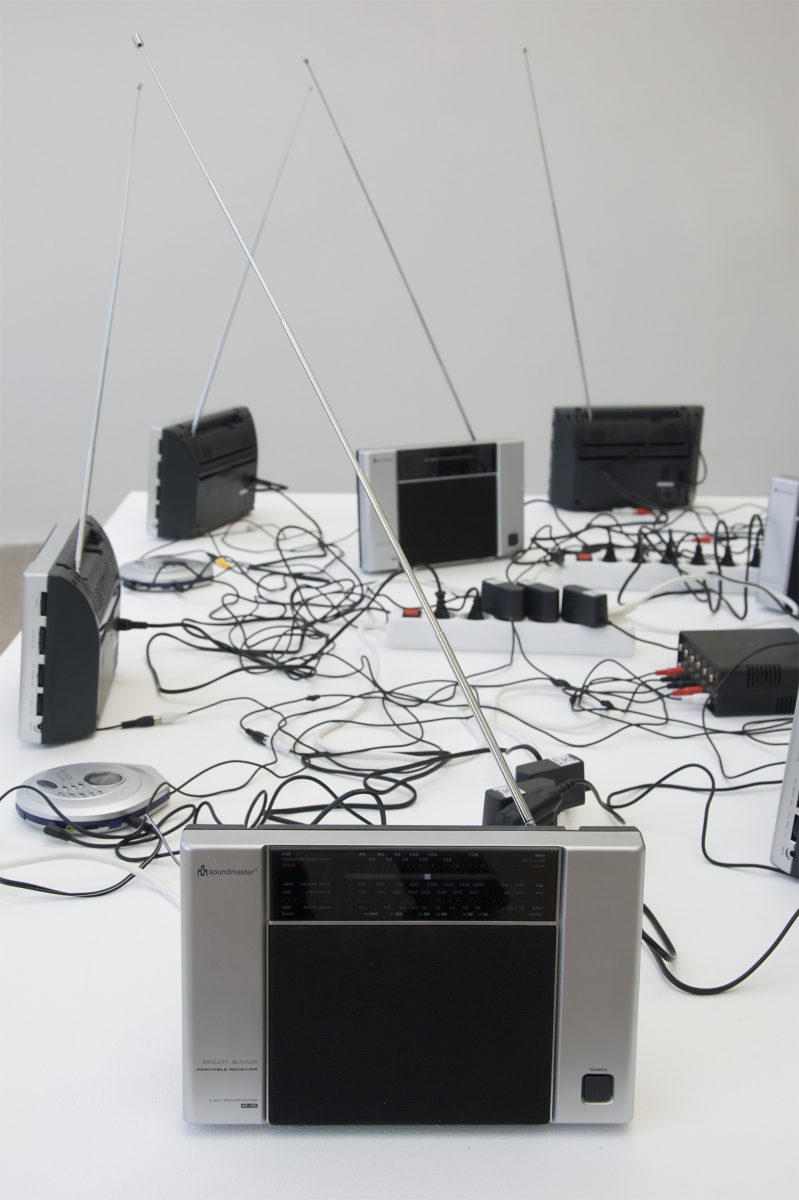 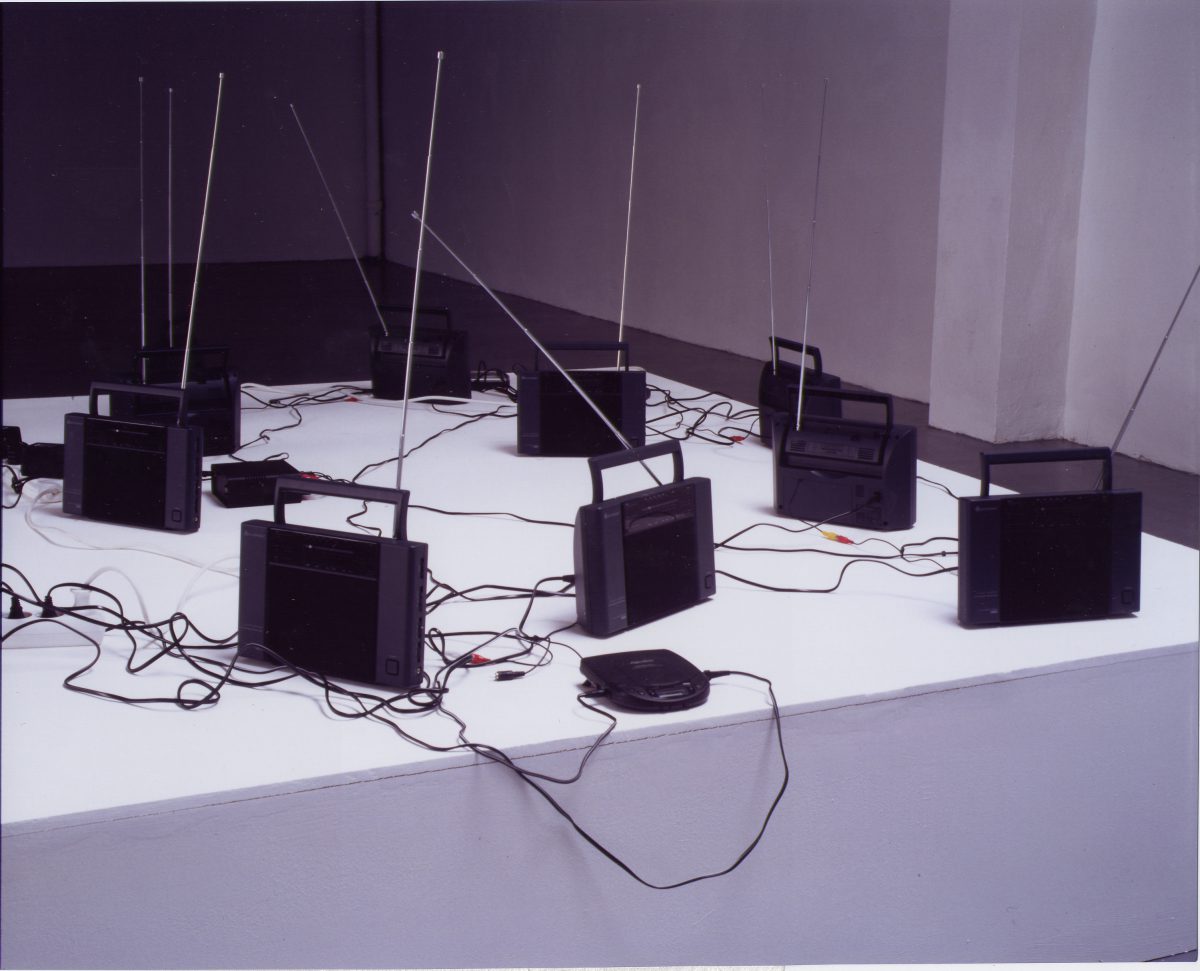 Ten transistor radios are set up on a pedestal and broadcast fragments from political speeches. The speakers say that they want to sacrifice themselves for their ideals of their country. Every radio is connected to a CD player and functions as a loudspeaker. The overall effect is a soundscape in which the volume increases and decreases intermittently. The audio fragments, taken from documentary films, reflect the theatrics of martyrdom as an attempt to protect one’s own identity from the outside world.

“Eternal honor for our death, these martyrs said no to the enemy that want to occupy our country.”
Johan van der Keuken, De Palastijnen, 1995

“National Liberation Front (FLN), Communique, # 1. Citizens of Algeria, our fight is against colonialism. The aim is independence and restoration of the Algerian State based on Muslim principles and respect for fundamental rights regardless of race or religion. In order to avoid bloodshed, we still propose to the French, fair talks leading to recognition of our right of self-government. Algerians, it is your duty to restore your country’s freedom, you will win.”
Gillo Ponecorvo, La Bataille d’Algiers, 1962

“I have thought about leaving often. I’m not up for suicide, I love life and I have a lot to live for. And I don’t want to die. But I don’t want to choose between my life and theirs. Okay, so the reasonable thing to do is to get out of there while I still can. But for those little children, who would be there to take care of them. Whose heart could be so stoic as to do the reasonable thing when you’re faced with their tears and their loneliness. Not mine, dear friends, not mine.”
“As a shepherd, I am obliged by divine law, to give my life for those I love, for the entire Salvadorian people, including those who threaten to assassinate me. I give my blood to god for justice and the resurrection of El Salvador.”
Joseph Sargent, Choice of the Heart, 1975

“Will we give up? NO!
Reject the revolution? NO!
Renounce socialism? NO!
Surrender? NO!
We have to declare above everything, we are Marxist-Leninist.
We shall win. Our country or death! We shall overcome.”
Cuban Missile Crisis, BBC, Timewatchspecial, 1992

“I want to say something. My name is Marcau, Rodica. I am from Konsum, Temesvar. I was defending our cause on Sunday. On the way home, Securitate shot at us. Some were arrested, beaten and tortured. Slapped in the face with a rifle butt. I am confined to my bed, but in the name of Konsum I sympathize with the youngsters from Temesvar, those from Bukarest and from the whole country, in favor of the big Revolution. We want to have a better life, that young people can be free, that we have bread. We want to be happy. We don’t want to live under dictatorship anymore. We want Ceaucescu to be convicted, here in Banet. We will join the people on the square of the opera, so that they get stronger, and will be able to carry on. We don’t want Securitate! Weapons should be destroyed. Let us commemorate the 4000 people killed. We want our deceased to be identified.”
Haroun Farocki & Abdei Ujica, Revolution Rumanien;
Videogramme einer Revolution, 1992

“Everybody thinks; we cannot do it. That’s why they all leave. So we need to have honest leaders, that can give us good schools. Because we can do it ourselves and we’re going to do it too.”
“Well, what’s going wrong here… Everything! government, police, corruption. Nothing goes well in Surinam, and that’s why a lot of people have to leave. But I think they should stay and help to build up Surinam.”
Suriname weer een Kolonie?, Vesuvius, Ikon T.V.1993

“Mister Mayor, I call you as such, even though you were not elected by us, and have no mandate to stand on this platform. You speak of democracy. You say, we must do this, we must do that. But who is this ‘we’ you are talking about? ëWeí have no money for rent, we do not earn enough to support our families. Many of us are out of work. There is a shortage of jobs. Whereas you, Mr. Mayor, have a high-paid job, many businesses, houses, cars. So maybe for you Apartheid is comfortable, but it is at our expenses. And we are sick and tired of carrying you at our backs. What we are saying is this, you must be a accomplice to the people or you’ll die.”
Ali Mazrui, The Africans, New Conflicts, BBC, 1986

“I can’t live simultaneously in my head and in my body, that’s why I can’t be just one person. I can feel myself countless things at once. There are no great masters left, that’s the real evil of our time. Our heart’s path is covered in shadow, we must listen to the voices that seem useless. Into brains full of sewage pipes, of school walls tarmac and welfare papers… the buzzing of insects must enter. We must all fill our eyes and ears with things that are the beginning of a great dream. Someone must shout that we’ll build the pyramids. It doesn’t matter if we don’t. We must fuel that wish. We must stretch the corners of the soul like an endless sheet. If you want the world to go forward we must hold hands, we must mix the so-called healthy with the so- called sick. You healthy ones! What does your health mean? The eyes of all mankind are looking at the pit into which we are all plunging. Freedom is useless if you don’t have the courage to look us in the eye, to eat, drink and sleep with us! It’s the so called healthy who have brought the world to the verge of ruin. Listen, man! If you, water, fire and then ashes. And the bone in the ashes. The bones and the ashes. Where am I when I’m not in the real world and not in my imagination? Here’s my new pact with the world: It must be sunny in winter and snowy in August. Great things end, small things endure. Society must become united , instead of being fragmented. Just look at nature and you’ll see that life is simple, that we must go back to where we were, to the point where you took the wrong turning. We must go back to the main foundations of life without dirtying the water. What kind of world is this if a madman has to tell you to be ashamed of yourself. The air is that light thing that moves around your head and becomes clearer when you laugh.”
Andrej Tarkowsky, Nostalgia, 1983

“England is powerful, with its army, its navy and its modern weapons. But when a great power like that strikes defenseless people, it shows its brutality, its own weakness. Especially when those people do not strike back.”
Richard Attenborough, Gandhi. His Triumph Changed the World Forever, 1992